Unfamiliar with the sources of rising sea levels? See our Why is it Rising page for a short description. 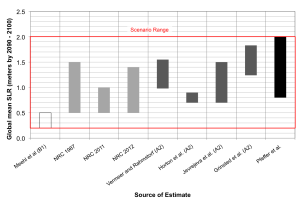 If by 2100 there was only a 40 cm rise in sea level would increase coastal flooding from 13 million to 94 million (a 723% increase) people globally being affected every year. (IPCC 2007 Report on Sea Level Rise)

According to scientists, sea level could rise globally between 0.2 and 2 meters (8 to 79 inches). 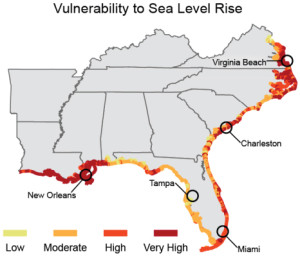 Areas of the Southeast are more vulnerable than others due to the sinking, or subsidence, of the local land (Sallenger et al. 2012).

The SC coast includes one of the ten fastest growing areas in the country, Myrtle Beach, which is rated highly vulnerable to storm surge. (U.S. Census Bureau 2010)

Charleston, SC is listed as one of the top five cities with the highest risk to a rise in sea level. (Strauss et al. 2012).

Great Reports to Check Out!