Rising seas means less beach. Some of South Carolina’s greatest beaches are already largely underwater at high tide. Rising seas also means that more sand will be washed away from our beaches. To deal with this erosion, communities often renourish their beaches (in other words, deposit more sand from somewhere else). Unfortunately, this practice is costly and only temporary. In fact, beach communities in South Florida are now facing a sand crisis; they are running out of places to find the relatively cheap offshore sand that they have historically used for renourishment.

Here in South Carolina, we have spent hundreds of millions of dollars on beach renourishment and there is no end in sight. Read below to learn more about renourishment projects in SC. 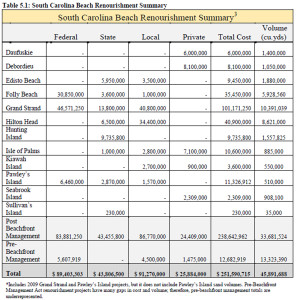