The South Carolina Small Business Chamber of Commerce, in partnership with the American Sustainable Business Council and the Southern Alliance for Clean Energy, initiated a Sea Level Rise Education Project (www.scbars.org) in May, 2013.  The project consisted of working with the scientific community in establishing high tide projections in 2100 with a six foot sea level rise, identifying business areas to be impacted along the South Carolina coast, soliciting cooperation from affected municipalities and business organizations, and contacting small businesses projected to be directly or indirectly impacted by the high-tide in 2100 if climate change is not successfully addressed.

This project began a process to organize, educate and obtain the cooperation of coastal businesses and municipalities to allow tourists to personally see the ultimate physical and economic consequences of climate change and rising sea levels.  Projected high tide sea levels by the end of the century were marked by blue tape on the interior and exterior of buildings projected to be impacted.  These businesses and others posted signage directing tourists and customers to look for the tape and visit a website for more information.  Approximately 50 percent of all businesses approached agreed to participate.  The website included a thorough explanation of sea level rise and climate change as well as a letter that business leaders and the public could easily send to members of Congress and the White House calling for action to reduce carbon pollution and transition the country to a clean energy economy.

SC BARS has demonstrated that small businesses along the South Carolina coast, when contacted directly in person, are very accepting of a climate change message that included the threat of rising seas and the need to transition to a clean energy economy.  The project has received local and national media coverage.

In Phase 2 of SCBARS businesses are being asked to show their support for taking action to address the threat of rising seas due to climate change and for local government to begin sea level rise resilience planning.  Blue tape stamped with “SCBARS.org” will be displayed on windows and doors of participating businesses to encourage tourists and customers to go to the website to learn more and where they can easily contact their members of Congress and the White House calling for policies to fight climate change that is causing the rising water level. 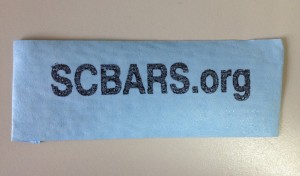 Businesses will also be asked to join small business climate change action groups to further educate other small business owners and local elected leaders to the threat of sea level rise. There is no cost to local businesses to participate or to tourists or locals to become coastal advocates.